Since childhood, I was fascinated by mythology, and we made a trip to Greece when we did not have girls yet and it revived even more my desire to know more and be able to transmit that knowledge to my children. Time has passed and now the girls are a little older and they also show interest in it, so whenever we can we introduce it in our daily lives as many opportunities arise; most of the planets in our solar system are named after gods, and the same with stars and constellations; many words with its origin in Latin also refer to the gods, as the Bacchanalia, parties in honor of the Roman god Bacchus, or from the Greek as aphrodisiac, from the goddess Aphrodite. Also, the days of the week take their names (in Spanish and many roman languages) … I could go on with many more, but taking advantage of fall beginning today I want to tell a story that my girls love it, and that is …

The god of Olympus, Jupiter, and the goddess Ceres had a daughter they named Proserpina. At that time Ceres, who was the goddess of the earth, the protector of the fields, flowers and crops, the main responsible of flowering plants, the growing of vegetables, flowers, vegetables and cereals, was happy and radiant. But one day something happened that made everything changed.

Ceres was walking through a forest when suddenly she heard a cry for her daughter Proserpina. She ran to help but did not have time and saw Pluto took her in his car to his underground kingdom, a place said you could not get out. Ceres became so angry that requested aid to other gods to take her daughter there, but all they said that only Pluto could.

– “Well, if you do not help me to get my daughter Proserpina, I will not work anymore.” The fields dried, the leaves of the trees fell, there were no flowers in the gardens and hid the sun. Nobody had food and people were starving, so the rest of the gods had to act.

They called the god of the underworld, Pluto, to come out in his car to the surface and between all had a conversation.

– Pluto, Proserpina has to return – sail all the gods-  Ceres is very sad and she doesn’t want to work. People are starving and all fields have dried up.

– Proserpina can go out -Pluto said- if she does not eat anything she finds there.

When she was told she could leave, she was so happy that on her departure she found a pomegranate and ate the fruits. Now she had a problem!

Among all the gods, they persuaded Pluto to let her out 6 months a year to spend with her mother Ceres, and the other six months with him underworld again.

Ceres joy at seeing her daughter made it all flourish again, fruit, vegetables, cereals, flowers … Then came the spring filling the world of color and joy, and enjoyed together the sun and the beach until the summer ended.

Then Proserpina had to return with Pluto, and Ceres became so sad that the leaves of the trees fell, giving way to fall. And the more time passed without her daughter, Ceres would start shivering and so came the winter. And so the seasons were established. 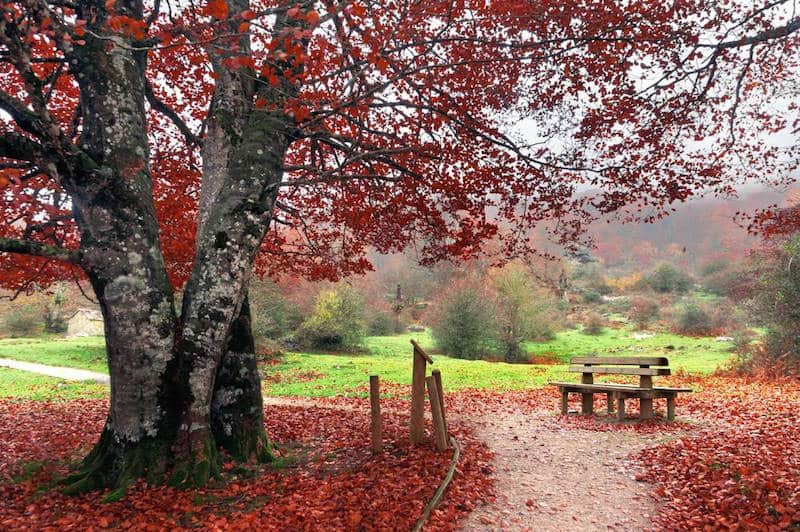 Surely now we’ll see fall in a different way, and I take the opportunity to leave you the video of Martha Wainright, a Canadian singer who sings the sadness of Ceres in pursuit of Proserpina, and where you can see expressed the changing seasons.

I hope your children or grandchildren enjoy the story as much as we do.

Do you love DIY, recycling, home decor, furniture transformation and all kind of crafts? Then we have the same passion! I would love to share all my crazy ideas and projects with you so I would love if you sign up for my post e-mails.

I also share interesting content on Facebook and other social media, and I would love to hear from you! Don’t be shy and stop by to say hello here.